Let us tell you about the story of our good friend, James

He will share with you one of the worst experiences he’s had on his keto diet.

Last year, he focused all his time and energy on losing weight fast and boosting his strength, so he decided to add an intense workout aside from sticking with his keto diet.

So he’s been working his butt off doing cardio and lifting weights. To keep up with his physically demanding lifestyle, he started drinking more electrolyte drinks.

Guess what? Instead of feeling better, he felt worst!

His weight stayed the same.

He feel tired all the time.

As if that wasn’t enough, he experienced keto flu once again!

So he decided to do some research to determine what’s wrong with him.

Here’s what he found: his electrolyte drink kicked him out of ketosis!

It has too much sugar and, worse, lesser electrolytes than what his body needs.

He went through hell because of his wrong choice of electrolyte drink, and he doesn’t want this to happen to you,.

Therefore, we’re here to review all electrolyte drinks in the market to help you find the right one for you.

What is Gatorade Zero? You already know what Gatorade is for—it’s an electrolyte drink that’s designed to replenish the electrolytes and nutrients you lose when you sweat.

In particular, Gatorade Zero contains potassium and sodium, which are the two main electrolytes lost after sweating or exercising (1).

Gatorade Zero is called as such because it’s marketed as a zero sugar and almost calorie-free drink.

The manufacturer claims it delivers zero sugar hydration with electrolytes to replenish the electrolytes that you’ve lost in sweat. In addition to having different package sizes, Gatorade Zero also comes in different flavors, including:

These flavors are created to help the consumer to enjoy the drink in the best way possible!

To determine if this drink is Keto friendly or not, we have to explore its ingredients list.

According to its label, the drink is made up of

Here’s the interesting thing about this drink: even though it’s zero sugar, the drink tastes sweet and is available in various flavors.

The question is, what makes this drink sweet if it doesn’t contain any sugar. The answer is pretty simple—it has artificial sweeteners, particularly sucralose and acesulfame potassium (Ace-K).

As much as possible, it’s recommended that you opt for drinks or food items that use natural sweeteners. This is because the use of artificial sweeteners is closely linked to specific health ailments, especially when used in the long run.

With that in mind, let’s take a closer look at how the consumption of these artificial sweeteners can affect your health:

Sucralose is the only artificial sweetener that doesn’t cause a serious adverse effect on our health.

However, it has a high glycemic index. Glycemic index refers to how fast a food item can raise blood sugar levels. Because of this, you may want to minimize its consumption.

If you love drinking sugar-free or zero sugar drinks, you may have already heard of this sweetener as it’s a popular sweetener for diet sodas. However, this has been closely associated with changes in the gut microbiome. (2) 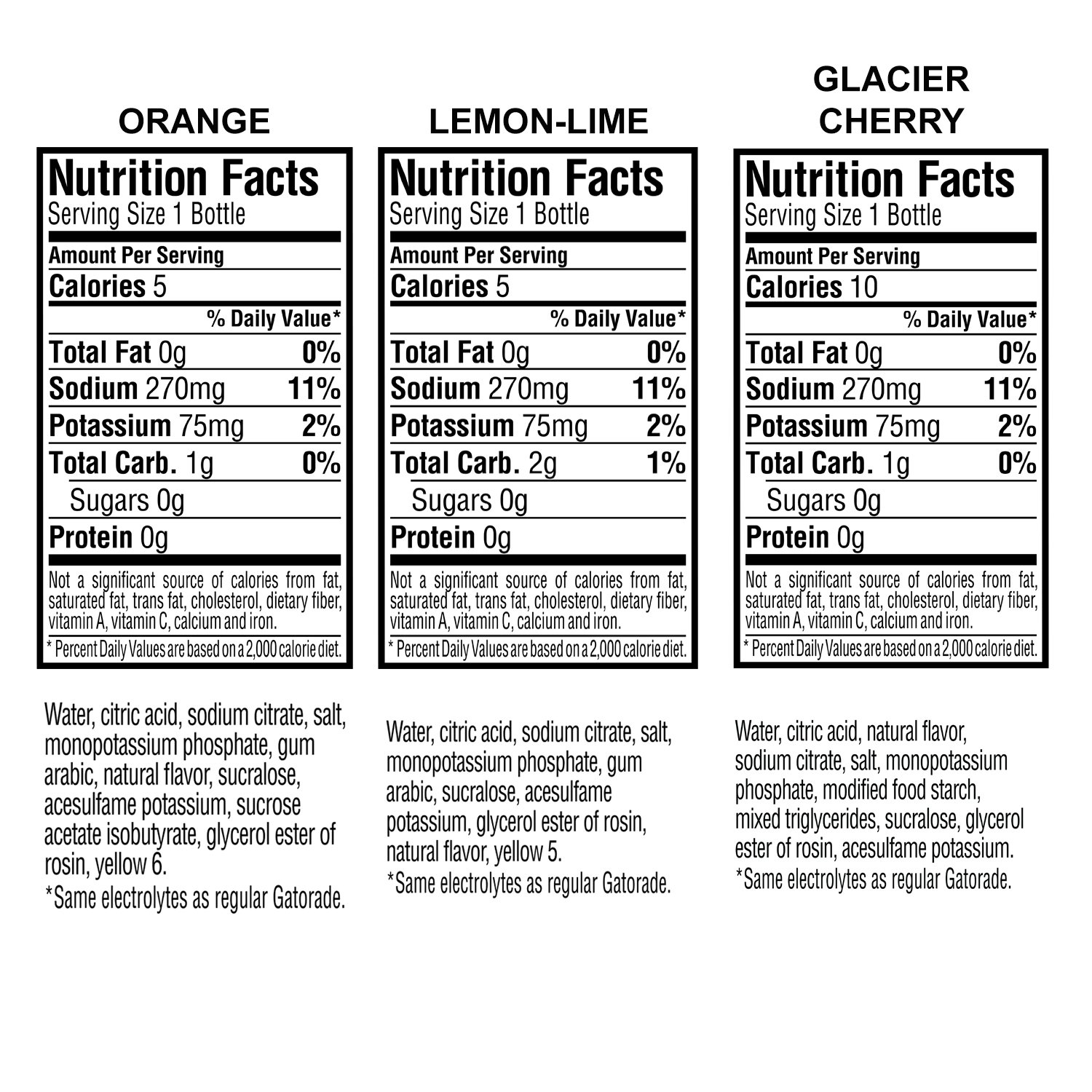 The serving size of Gatorade Zero is 20 fl oz.

What can you get from drinking a single serving of this sports drink? As per its nutrition information, Gatorade Zero contains 0 calories, fat 0g, 0 grams of protein, and less than 1 gram of net carbs.

This is the biggest question of all—is Gatorade Zero keto-friendly? This issue arose because many people commonly mistake Gatorade Zero as an energy drink when it’s a sports drink.

What’s the difference, you may ask? Well, energy drinks often come with stimulants like caffeine and are designed to boost energy. Most of these also contain added sugar. On the other hand, Gatorade Zero doesn’t contain added sugar nor caffeine. It also has electrolytes to replace what you’ve lost when you sweat or exercise.

Even though Gatorade Zero is not zero carbs as they initially claimed, it contains only less than 1 gram net carb, which makes it low carb and suits the macronutrient profile required for the keto diet. (3)

The main reason why many athletes and physically active people consume Gatorade Zero is because of its electrolyte content which you can’t find in plain water.

Replenishing the electrolytes that you’ve lost is essential to maintaining good health and maintaining crucial bodily functions such as the following:

When Should You Drink Gatorade Zero?

There’s no strict drinking schedule for Gatorade Zero, meaning you can drink it any time of the day.

But if you want to maximize its electrolyte content, we suggest that you drink it after physical activity or spending a few hours outdoors or under the sun. Generally, you should drink it within an hour after the said activities.

Not only that, but you can also drink this electrolyte drink when you’re experiencing signs of dehydration like fatigue, dizziness, headache, or rapid heartbeat. (4)

You can also drink it anytime you feel thirsty as it’s a great thirst quencher.

Yes, Gatorade Zero is Keto, but is it good for your health? This is one of the questions you need to answer before consuming vast amounts of this electrolyte water.

The biggest health concern people have about this is its use of artificial sweeteners, which has been closely linked to several health issues like cancer, digestive problems, and many more.

The good news is some studies concluded that artificial sweeteners are generally safe for human consumption. (5)

However, not everyone should consume them. Drinks or food items containing artificial sweeteners are not recommended for people with phenylketonuria as they will not be able to metabolize phenylalanine found in aspartame.

What are the Other Keto-friendly Sports Drink?

Okay, electrolyte drinks are Keto-friendly, and the artificial sweeteners that they contain are safe for human consumption, but there’s one more issue. Can Gatorade Zero replenish electrolyte levels? Can it do its job?

We have to take a look at its electrolyte content which is made up of 2% DV of Potassium and 11% DV of Sodium. Its content is better than plain water, which is devoid of electrolytes. However, it may not be enough to replenish the electrolyte levels that you need.

With that in mind, we like to share with you some of the best keto electrolyte drinks that can maintain your electrolyte levels without kicking your body out of ketosis. Here they are:

Gatorade Zero is one of the most popular keto electrolyte drinks on the market.

It also comes in a wide range of flavors, so you can easily find one which will suit your personal preference. When it comes to versatility, taste, and keto friendliness, this is truly a winner.

However, you need to ensure that you’ll consume this drink only in moderation. Keep in mind that it still contains carbohydrates, so drinking too much of it may cause you to go over the carbohydrate restriction of the keto diet.

But suppose you’re keen on replacing your lost electrolytes. In that case, we recommend going for electrolyte drink mixes as these generally contain significant amounts of electrolytes (Potassium and Sodium) that can make a big difference in your health